The infinite expanse of space – but is the idea and the implementation of a satellite Internet network just as limitless? Can satellites keep the promises that providers make? Will high latency and sluggish Internet speeds soon be a thing of the past for underserved regions? And will Internet from space replace the fiber optic network in the long term? Ivo Ivanov, CEO at DE-CIX International, clarifies where the limits of the technology lie and classifies where we can really benefit from it.

The “Internet” is a scarce commodity. Around 40 percent of the world’s population has no (efficient) access to the Internet. However, this does not only affect developing countries. In many developed countries, too, residents and businesses, particularly in remote locations, still struggle with copper cable networks and inadequate fiber rollout. The result is low Internet speeds: According to the International Telecommunications Union (ITU) 2021 report on Measuring Digital Development, the share of Internet users in urban areas is twice as high as in rural areas, worldwide. And not only the share, but also the speed varies, with rural households still experiencing single-digit Mbit download speeds in many areas.

Modern digital applications require fast broadband and a latency (measured in the time taken for data to travel from the user to the server where the website or content is hosted and back again) of less than 65 milliseconds to create an enjoyable user experience. Businesses, in particular, find it difficult to cope with such poor Internet coverage. Real-time data processing simply cannot succeed under these circumstances. In our fast-moving networked world, rural companies are clearly lagging behind their urban competitors when it comes to fiber-optic connections.

While the response to Covid-19 led to an uptake in fiber rollout, with subscriptions surpassing copper-wire DSL in OECD countries for the first time in 2021, there is still a lot of work to be done. However, in view of the enormous costs involved, the gapless roll-out of a fiber-optic infrastructure will be a project for the future – one that will take a great deal of time. The search for medium-term alternatives is therefore entirely appropriate. One possible alternative is the use of LEO (Low Earth Orbit) satellites: Internet from space holds the potential to provide underserved regions with better access to the Internet.

The advantages of satellite internet

Basically, the idea of satellite Internet is not a new one. Since the early 2000s, providers such as EUTELSAT, SES Astra, Telesat, HughesNet, and ViaSat have been putting satellites into orbit to provide Internet access. These are largely geostationary satellites, located at an altitude of about 36,000 kilometers. However, this form of Internet supply has significant disadvantages that can be eliminated with LEO satellites. For one thing, the cost of constructing and installing LEO satellites is much lower than the outlay for either geostationary satellites or fiber rollout. On the other hand, significantly higher Internet speeds and lower latencies can be achieved due to the satellites’ proximity to the earth and consequently shorter data transmission distances. The operation of satellite Internet is simple and works in principle like the connection between a cell phone and a cell phone tower. The satellites have receiver-transmitter technology that allows them to establish a link between two points in line of sight. This allows them to communicate bidirectionally with ground stations on Earth that are connected to the Internet. A further recent innovation is optical communication – laser connectivity between satellites – incorporated into the latest-generation satellites launched by Starlink in September 2021. The work put into this technological innovation led to a slow-down the pace of launches for the company in 2021. But in the long run, this technology has the potential to increase transmission speeds dramatically – faster than fiber in the vacuum of space.

Faster satellite Internet would not only benefit individual residential users beyond the fiber-optic connection, who could use it to enjoy digital entertainment without lags, for example. There are also benefits for companies whose operations or employees are based in rural areas, not to mention island populations – many of which do not enjoy submarine fiber connectivity. With LEO connectivity, people in these locations would be able to process data in real time, allowing them to respond quickly to changing market and customer demands or optimize their cybersecurity strategy. After all, the faster the identification of anomalies and potential threats within the data sets, the faster attacks can be responded to with the appropriate measures. This can only be achieved with fast Internet. In addition, the migration of data, applications, and processes to the cloud, which is now considered standard in many companies, could be implemented company wide. Efficient access to corporate resources forms the basis for employees to consider remote work as a realistic alternative, for example.

Even though satellite Internet has been on the market for around 20 years, there has been an increase especially in recent years in the number of initiatives and companies exploring in-depth the concept of Internet from space. One of their main goals is to drive the development of technologies for rapid and efficient implementation, thus providing more people with better access to the Internet. The New Symphonie consortium led by UNSEENLABS and EUROCONSULT, for example, is made up of 22 European companies – including DE-CIX. Together, they are researching and developing ways for the European Commission to establish a long-term reliable, secure, and cost-effective communications network based on satellite technology. The fact that such projects are being actively promoted by the European Union shows that satellite Internet is now definitely perceived and promoted as a viable alternative in terms of widescale network coverage.

Probably the best-known company active in this direction is SpaceX. The realization of its Starlink satellite network started in March 2019 and entered a beta testing phase in 2020. Currently, approximately 1,700 Starlink satellites are in low-Earth orbit at an altitude of 550 kilometers, which means that the data sent and received travels a much shorter distance than geostationary satellites. The number of satellites is expected to grow as high as 42,000 in the future. Starlink is now available, still in its beta version, for users in the US, Canada, the UK, France, Germany, Austria, the Netherlands, Ireland, Belgium, Switzerland, Denmark, Portugal, Australia and New Zealand. Here, the download speeds range from 84.5 Mbit/s in Canada up to 138 Mbit/s in Australia – even at its slowest faster than most conventional fixed-line Internet connections. While Starlink is in the lead in the new space race, they are not the only ones: companies OneWeb and Hughes joined forces recently to announce their intention to provide nationwide LEO Internet connectivity for India. Currently, OneWeb has close to 400 of its 648 planned LEO satellites already in orbit.

Satellite network operators alone do not automatically become satellite Internet providers once they place satellites in orbit. Establishing a functioning satellite Internet coverage entails numerous challenges for providers. LEO satellites orbit the globe in their low-Earth orbit at a speed of approximately 27,000 km/h. Accordingly, both a high number of satellites communicating with each other and regular, continuous handovers to ground stations are necessary to ensure uninterrupted connectivity. Since communication between satellites and ground stations only works once there is visual contact, data transmission is partly dependent on weather conditions. Providers must consider these potential limitations when deploying a constellation of LEO satellites for Internet connectivity.

Moreover, the infrastructure consists not only of satellites and ground stations. The latter must be interconnected with other networks via high-performance interconnection on the ground. This interconnection of different networks usually takes place at an Internet Exchange (IX), from whose interconnection ecosystem Internet service providers benefit. For this purpose, the provider’s ground station must be connected via fiber-optic cable with a data center which in turn is connected – also via fiber – with the nearest Internet Exchange. The IX will then enable satellite Internet providers to connect to relevant networks and provide their users with high Internet speeds and low latency. Fiber therefore continues to play a fundamental role, even providing support for its potential alternatives.

A LEO satellite Internet network can be set up and made usable comparatively cheaply and quickly. The proximity to the earth allows for faster Internet speeds and low latency. As a result, it offers an ideal opportunity to support network expansion and provide Internet coverage in rural areas while the rollout of fiber-optic infrastructure is in progress. However, fiber is currently still far superior to the alternative from space in terms of speed and latency. In addition, satellite Internet-related infrastructure on the ground continues to depend on fiber. Satellites will not be able to completely replace the fiber optic network in the near future – but the satellite operators are probably not even aiming for this. On the contrary, it is becoming apparent that the greatest added value is created when both technologies exist side-by-side in a meaningful symbiosis and can benefit mutually from each other. It will be a long time before network coverage guarantees fiber-optic Internet for everyone. Until then, satellites can remedy the situation and reduce costs. The situation is similar on the corporate side: For the coming years, satellite Internet can transitionally be a tremendous asset for businesses in rural areas, allowing them to implement long overdue technological innovations. In the long term, however, there will be no way around the fiber-optic network here either. 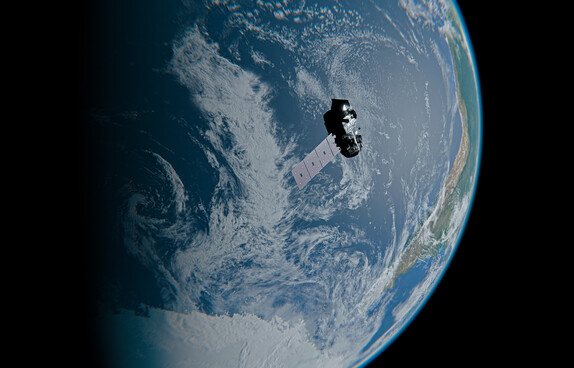